Almohada, almendra, aldea. Ever wonder why so many Spanish words begin with al? Contrary to what you might have learned, not all Spanish words come from Latin. In fact, a large portion of the Spanish vocabulary comes from the Arabic language. In this article, we’ll explain how Arabic came into contact with Spanish and we’ll point out some key Spanish vocabulary that is of Arabic origin. 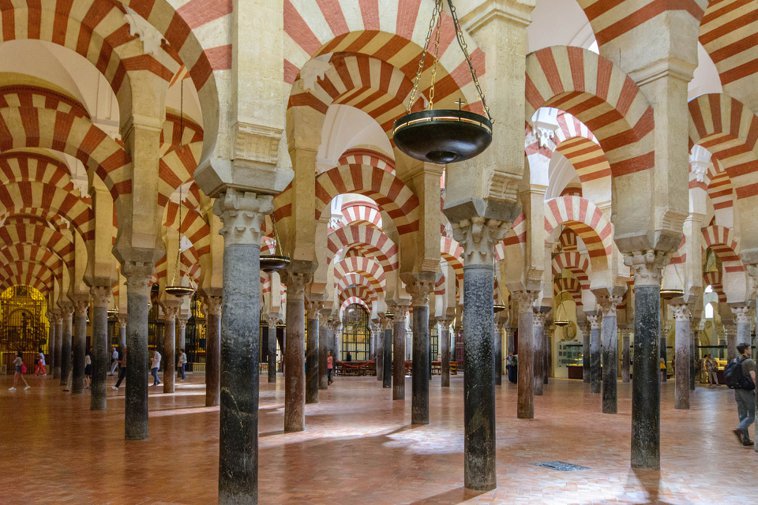 In 711 C.E., Arab armies began the conquest of the Iberian Peninsula. With the conquest, the hispanomusulmanes, or Moors, brought with them their Arabic architecture, art, and of course, language. Over time, Arabic expressions mixed with old Spanish vocabulary to become the Spanish dialect that most Spanish-speaking countries use today: castellano, or Castilian Spanish.

Even after los Reyes Católicos(the Catholic king and queen) Ferdinand and Isabel expelled the Arab empire from the Spanish kingdom in 1492, Castilian Spanish has retained approximately 8,000 words with Arabic origin to this day. After Latin, Arabic has made the greatest contribution to the Spanish language.

Traveling through Spain, it is almost impossible to avoid the name of a place or geographical feature that is derived from Arabic. To name just a few:

The translation of Andalucíaas the Vandals has been contested. In general, scholars agree that al-andalus was the name given to Muslim Iberia.

Something interesting to note about the above names is that the majority of the Spanish locations and geographical features derived from Arabic are limited to the central and southern regions of the country, representative of how deep the Arab culture had set its roots into the culture of the peninsula. The Arabic influence on the Spanish language extends past the names of modern cities and regions. Perhaps the easiest way to see this influence in Spanish is in the simple words spoken every day. Here's a list of some of our favorite Spanish words with Arabic origin:

One of the most well-known words to come from Arabic, ojalámeans hopefully in English and comes from the Arabic expression: “law sha allah” which means if God should want. Remember that ojalá is a conjunction that can often, but doesn't need to be, used with que.

This next word, usted, is interesting because the word itself is derived from the Spanish expression vuestra merced, but in fact is phonetically similar to the Arabic word for doctor/professor: “ustadh”. In Spanish, usted is a pronoun that denotes formality and is typically used when we are addressing someone in formal situations.

Meaning until in English, hastacomes from the Arabic word “hata”, which is a preposition with essentially the same meaning as hasta.

Definitely the sweetest word on this list, azúcar, meaning sugar in English followed along the silk road and originates directly from the Arabic word "as-sukkar".

From the Arabic word, "zayt", aceite translates to oil in English - not the fossil fuel, but the delicious liquid that comes from olives, almonds, and more.

Meaning pillow in English, almohadaoriginates from the Andalusian Arabic word “mijadda”, which became “al-mujadda” in Andalusian Arabic (the Arabic of the Iberian Peninsula) and means “cushion” or “pillow”. The Arabic root of this word is “jadd”, which can mean lado(side) or mejilla(cheek) in Arabic.

Barrio, which translates to neighborhood in English, comes from the Arabic word, “barri”, which refers to the outer limits of a city. If you visit certain Spanish cities like Ciudad Rodrigo, Córdoba, or Béjar, you’ll immediately notice a muralla, or city wall, that separates the inner city from the neighborhoods on the outskirts. The hispanomusulmanes were meticulous about urban planning and specifically designed their cities to have specific barrios for the various religious and cultural communities living within them.

Ajedrez, or chess, is a popular game that was brought to the Iberian Peninsula by the Moors when they arrived in the year 711. Ajedrez is a game that has its roots embedded deep in the ancient Asian cultures, and the word came to the hispanomusulmanes through the Medieval Persian word “ash-shantranj”. When it was first adopted into Castilian Spanish, it was actually spelled acedrex, and over time the c and x became j and z, respectively.

Asesino, meaning assassin in English, has a surprising etymology. The word originally comes from one addicted to hashish, as a term derived by the Christians during the Crusades to demonize a certain Muslim sect that would, according to the Crusaders, become intoxicated from hashish and murder Christian leaders. Our English word, assassin, has the same etymology, although it came into our language from old French.

Over the centuries, the Arab culture has made invaluable contributions to the advancement of human civilization. Giant leaps of thinking in medicine, astronomy, and mathematics were made by early Muslim scientists and mathematicians. It’s no wonder, then, that many of the Spanish words in these fields are derived from árabe. Álgebra, or algebra in English, is no exception. This word comes from the Arabic “al-jebr”, literally, the reunion of broken parts, a term coined in the book, “Rules of Reintegration and Reduction” by the famed Muslim mathematician and astronomer, Abu Ja'far Muhammad ibn Musa al-Khwarizmi.

As you can see, each word of Arabic origin has a rich history that sheds light on how los hispanomusulmanes shaped the Spanish culture and language. Below you’ll find a list of even more Spanish words that have their origins in Arabic.

Get to know more loanwords and regional varieties of Spanish with these articles: