How to Make Paella

Maybe you’ve seen it on Netflix's new culinary competition The Final Table, or perhaps you’ve had it bookmarked in your Spanish cookbook for longer than you’d care to admit. Images of this colorful rice dish bursting with seafood have been tantalizing our taste buds for years, and it's time to do something about it! Bring an authentic taste of Spain to your table with paella, one of the most traditional and famous rice dishes in the world. 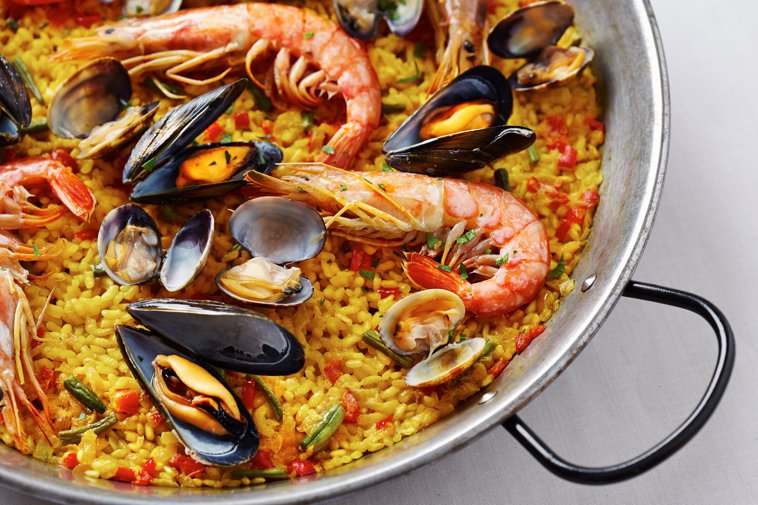 With its fast-growing popularity and international fame, it comes as no surprise that there are many different versions of paella. Traditional recipes have been adapted by chefs around the globe, which means this iconic dish often loses its authenticity, even in its home country.

Authentic paella originates from the Valencia region of Eastern Spain, and it comes in many varieties, including paella valenciana(Valencian paella) and paella de marisco(seafood paella).

¿Vives solo?(Do you live alone?) Paella isn’t meant for just one, so invite family or friends over for dinner. If you really want to impress your guests, serve some tapas(appetizers)!

Did you know that the term paella refers to both the Spanish rice dish and to the pan in which paella is cooked? The wide and shallow shape of this special two-handled pan, also called a paellera, allows the rice to cook evenly in a thin layer without leaving any water, yielding a dry texture. The splayed sides and slight dip in the middle of the pan allow the oil to pool for sautéing.

If you don't want to invest in a paellera, use the largest, shallowest skillet you have. Stay away from nonstick and cast-iron skillets.

Paelleras require an adequate heat source that can accommodate the whole pan. The best way to cook paella is al aire libre(outside), on a round grill or over an open wood fire. If this isn't an option, just use your biggest burner (or straddle the pan over two or three burners) and rotate the pan often to evenly distribute the heat.

All types of paella (even most of the impostors!) share essential ingredients. Start off on the right foot by gathering the following:

Paella is a rice dish, so choosing the right arroz(rice) is essential. Bomba rice is the best choice because of its high level of absorbency, but you can substitute with Italian Arborio rice or Japanese short-grain rice in a pinch. Just don’t use long-grain rice as the grains easily become mushy.

Do you want to know the secret to making great paella? It's all about the sofrito. Sofrito is an aromatic base used in paella and many other Spanish dishes to deepen the flavor. Spanish sofrito typically consists of pimientos rojos(red peppers), cebolla(onion), ajo(garlic), and tomate(tomato). The vegetables are sauteed in olive oil over medium heat until they soften. For the best result, use an extra virgin olive oil from Spain.

Azafrán(saffron) is the special ingredient that gives paella its unique color and flavor. It's the most expensive spice in the world, so it's a good thing we only need to use a pinch when making paella!

Some strict Valencian chefs only serve two types of paella: paella valenciana (made with meat and legumes) and paella de marisco (made with seafood).

Though some Spaniards will tell you it's not authentic, paella mixta(mixed paella) is served in many restaurants. Paella mixta is made with a combination of meat and seafood.

Cook With Care and Patience

The step-by-step cooking process varies depending on the type of paella you are preparing, but it all comes down to cooking the rice with care and patience.

In a perfect paella, rice should be al dente. The easiest way to ruin the paella is by overcooking the rice. Additionally, the rice should be dry, flavorful, and not at all sticky. Most importantly, a prize-winning paella will always have a socarrat, which is a caramelized crust of rice at the bottom of the pan. To ensure a proper crispy rice layer, do not stir the rice while it is cooking, and increase the heat at the end of the cooking process until the rice smells toasty and makes a crackling sound.

Are you too busy to make paella? We’ve got you covered! Click here to learn how to make authentic Mexican tacos!