HomeQ&ARedundant use of Indirect Object Pronouns

Redundant use of Indirect Object Pronouns

I have a Spanish Workbook and I saw this sentence in it:

From what I have learned here, shouldn't it absolutely, positively, be:

In the Reference section, you'll find this:

I don't want to step on anyone's toes here, but this assertion is flat out wrong.

1). The Indirect object is a personal pronoun (prepositional pronoun)

2). The indirect object is not a personal pronoun but precedes the verb

a). A mi madre le dieron el dinero. ? They gave my mother the money
b). A Paco le dio el libro. ? He gave Paco the book.

The indirect object is not a personal pronoun and appears after the verb:

Note: Even though it is optional in these cases, it is still much more common that the atonic pronoun be included.

If you are interested, you can confirm this with the DPD (which is certainly a more authoritative source than either myself or our own reference section) by looking up pronombres personales átonos. Scroll down to list item number 5.2 and 5.2.a, and you should find the pertinent information.

I just came across the following comic strip in another thread which illustrates perfectly the optional nature of the indirect object pronoun as described above: 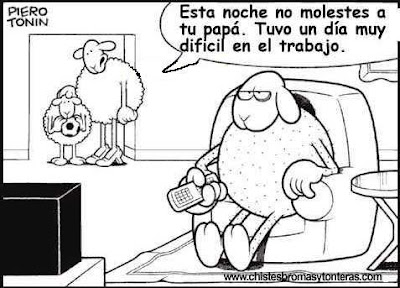 Its utter requirement as an unbreakable rule is an oversimplification of reality (according to this thread)...but I don't know if it can be left out of the given sentence or not.

(Apparently leaving out the IOP is extremely infrequent, but I just wanted you to be aware that native speakers can leave it out at times...and it's okay if they do that.)

In the Reference section, you'll find this:

When to Use the Indirect Object Pronoun

From what I have learned here, shouldn't it absolutely, positively, be:

The answer to this question is an unequivocal "No."

Even so, it probably wouldn't be a stretch to say that it would be much more common to see it as you have suggested.

Interestingly, this sentence as it stands is actually somewhat ambiguous as it can mean either:

1). Paula rented an apartment from her sister Ana.

2). Paula rented an apartment to her sister Ana.

I agree the workbook has an error.

By leaving out "le", the sentence has no indirect object. With "le", Paula rented an apartment to his sister, not for his sister. That is a change of meaning.

Wouldn't "for her sister" be "para su hermana"?

And, either way, since an Indirect Object always answers "to whom" or "for whom", wouldn't the "le" be mandatory in this sentence, regardless?

Thanks for that link. I think based on the info in that link, that it has to be:

At least to be grammatically correct.

That's where I learned it, plus from watching the video.

So, that's why I was asking if the sentence in that book was missing the "le", since you can't have "a su hermana" without it.