HomeQ&AWorld Cup: What is the worst so far?

World Cup: What is the worst so far?

Who the heck allowed this???? 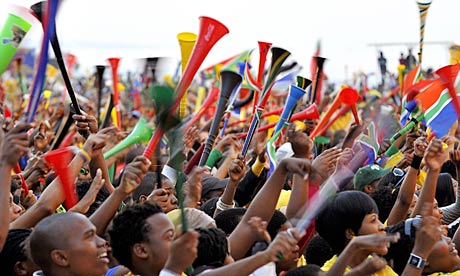 This was a debate on the BBC. They are trying to sell this to us as a tradition

The vuvuzela has killed singing at soccer matches

The cheering is gone, no singing and chanting, no voices, you can hardly hear the comentators, the players have difficulty concentrating...the noise is deafening!

I have no words....but there are more things really bad in the World Cup this year...

What do you think?

It was worst than you can ever imagine.

If you want to avoid hearing the noise on TV, turn the 300Hz frequency to zero and the rest of them to maximum in the audio settings.

With the vuvuzela, there is no discernible atmosphere! If there is then it's being drowned out my the obnoxious, monotonous drone. Can anyone hear cheering, chanting or singing (the elements that define 'atmosphere'), of any description?

The World Cup is 'owned' by FIFA and, as such, by the footballing world. It does not belong to South Africa just because they are hosting the event. And why should their self indulgence spoil it for the rest of us.

One wonders if those who produce the cacophony, have any interest in the football which is taking place. How can one watch a game with this inversed funnel stuck in in his/her gob?

It seems to have become self-fulfilling; the done thing to do because it's said that it's the South African way.

One 's not being a party-pooper by criticizing the inane activity; each to his own, but spare a thought for those of us that don't appreciate it.

And for anyone who thinks that this criticism is racist or patronising, then get rid of those chips on your shoulder and grow up.

updated JUN 16, 2010
posted by ian-hill
The vuvuzelas are dreadful and they do obliterate cheering, chanting and singing that one would expect at any high-level soccer match. - waltico, JUN 15, 2010
3
votes

They are right about 'the drone of a thousand bees'. The first time I watched one of the games, it sounded like they were playing in a large beehive. I bet everyone has a headache after the game.

Having to watch, and worse to listen to it . They have turned it into a circus ,it is no longer a game of football but a television spectacular that is over the top, I have given it away , too much hype and too much noise.

England doesn't have a goalkeeper

Haha, this reminded me of an email I got today:

Those idiotic trumpets took 99,99% of the pleasure I used to have watching football, and I only watch it when it's the World's Cup or the UEFA European Football Championship. The only solution is to wear earplugs and get a bit tipsy just before the game...

African tradition - my A***

What did they do before plastic was invented?

These D*** vuvuzelas have made me switch off the football!!!!

The only worse thing is the 2nd goal that England scored against the USA.

This Mundial will not be remembered for who wins it.

I'm glad to hear I wasn't the only one annoyed by the buzzing.

I've never watched World Cup Soccer before and was trying to watch on a spanish channel to work on my listening skills.

I thought the buzzing was traditional.

This is as bad as some high school graduations I went to this spring - so much cheering and horn blowing that we couldn't hear the names of the graduates!

I thought the background noise that sounded like thousands of bees buzzing was my TV playing up - DREADFUL. Good luck Spain - Wednesday (?) I shall be watching but with no sound!

Here is the perfect solution:

Goto the audio settings of your TV Set. Most of them have an equalizer. Open than and set the 300Hz frequency level to 0 and all rest to full.

And there you go! No Vuvuzelas. This works because vuvuzelas sound close to 300Hz frequency. Thus, you now no more hear them.

Try it and please do rate this

I've never been a sports fan or one to watch any game except golf and maybe an occasional Red Sox pennant game. Mostly general lack of interest but largely in part due the screaming, especially American football. Because of all the interest you guys have been showing over the past weeks I've taken a look at the real football and thought "this is pretty cool". That is until I watched part of a cup game. That noise would really P*$$ me off if I had paid money to sit in that crowd. I guess I'll stick to golf.

simpliest solution. you dont like the horns? either mute the televion or dont watch the match. if i paid 10 000 to watch football matches id wanna make as much noise as i want without anyone telling me to stop. :D so leave the people(passion horn blowing fans) alone.

Well, let's move on to the second best complaint then

A friend of mine said:

England and Argentina have a problem this year, they are both good teams, but

Argentina doesn't have a trainer

England doesn't have a goalkeeper

updated JUN 15, 2010
posted by 00494d19
We have 3 and the worst one was picked against the USA (he is the keeper who has let in most "unforced goals" in thE premiership this last season) - ian-hill, JUN 15, 2010
Well I thought Englands goalkeeper did just fine against the US :) - Yeser007, JUN 15, 2010
Heidita, by "trainer" do you mean what we in North America would call a coach? A trainer, in our continent, is someone who cares for injured players. - waltico, JUN 15, 2010
Coach - manager -trainer are all used to mean the same thing. - ian-hill, JUN 15, 2010
Next
🚀 Remove ads
SpanishDict is the world's most popular Spanish-English dictionary, translation, and learning website.
© Curiosity Media Inc.
FEATURES
TranslationConjugationVocabularyLearn SpanishGrammarWord of the Day
ABOUT
About UsPrivacyTermsSite mapHelpContact Us
SOCIAL NETWORKS
Facebook
Twitter
Instagram
APPS
iOS
Android