I spoke with a couple of Spanish speaking Mexicans and they do not use the word “ducha” for shower, they use “banar en el bano”. So way does Rosetta Stone and Spahishdict teach ducha for shower.

My experience is that in Spain, "la ducha" is used as the noun shower, while to take a shower is expressed by the reflexive verb "ducharse".

While "el baño" can mean the bathroom, it is also generally the word used for a bath / bathtub. To take a bath is expressed by the reflexive verb "bañarse".

Me voy a bañar por la regadera (take a shower).

Me voy a bañar en la tina (take a bath).

Me voy a bañar (I am going to bathe).

Any Mexican with at least a second-grade education knows what Ducha means It's just that it's only used in certain circles.

I'm guessing that it is the more "polite" way of saying it. For example,

Did that help somewhat..?

Ducha is just a diffrent word for shower. They just don't use it. In America we say the trash can or the garbage can. In Britain they say bin. If I say trash can in Britain, they may think it's strange but they would understand. Surely they know what Ducha means

We use shower as both noun and verb. The shower and take a shower.

In Costa Rica, they refer to the place where you take a shower as "Bañar" if it is in a bathroom.

The actual object of the showerhead in the bathroom or a shower by a pool is referred to as Ducha.

Something I thought was cool.

This is a "ducha para agua caliente" hot water shower commonly found in CR. The wires are for 220 VAC that are connected to two un-insinuated heater coils directly in the water. If someone is taking a shower and touches the metal pipe that is grounded, they will feel a tingle. It is an on demand hot water heater for around $20. 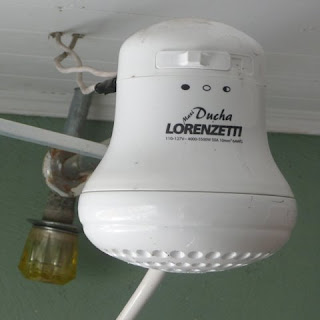 Voy a ducharme. Voy a bañarme is the way to use those phrases, voy a + infinative of course that is only speaking as first person otherwise you would conjugate the initial ir verb. I am surprised to hear that they don't know what a ducha is in Mexico.

Well think about how many different countries there are that speak Spanish world wide. There are even different words for different things in different areas of the same country. English is like that too, there are word usages that vary from place to place. Sometimes you just 'accept' when you are learning a new language - you embrace the differences and enjoy them. Wait til you come to the different names for food - every place seems to have a different name for the same stuff!

I think it's because that is the correct way of saying it. Tell anybody that speaks Spanish fluently about "ducha" and they'll know exactly what you're talking about, even though they don't use that word themselves.

updated JUN 2, 2010
posted by tamalmalamarrado
but they never even heard the word ducha, its just odd because i want to learn to speak with the people i work with but it seems i am learning a different spanish. - Benton, JUN 2, 2010
🚀 Remove ads
SpanishDict is the world's most popular Spanish-English dictionary, translation, and learning website.
© Curiosity Media Inc.
FEATURES
TranslationConjugationVocabularyGrammarWord of the Day
ABOUT
About UsPrivacyTermsSite mapHelp
SOCIAL NETWORKS
Facebook
Twitter
APPS
iOS
Android