HomeQ&ACrazy laws that are still in the books.....

Crazy laws that are still in the books.....

There are many crazy laws that are still in the books in the U.S. I'm sure this is true in other countries as well.

I was reminded of this by our member Sanlee:

It is prohibited to throw pickle juice in a trolley in the state of Rhode Island.

Just for laughs, please add any crazy, antiquated laws that you are aware of to this thread.

Here is my contribution:

"It is illegal to allow a donkey to sleep in a bathtub in Brooklyn, New York". 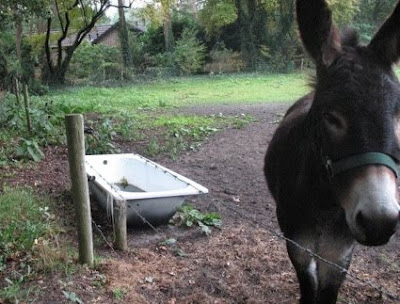 These are taken from The Book of Useless Information:

A Virginia law requires all bathtubs to be kept out in the yard, not inside the house.

Dueling is legal in Paraguay as long as both parties are registered blood donors.

Impotence is legal grounds for divorce in twenty-four American states.

In a tradition dating back to the beginning of the Westminster system of government, the bench in the middle of a Westminster parliament is two-and-a-half sword lengths long. This was so the government and opposition couldn’t have a go at each other if it all got a bit heated.

In Alaska, it is illegal to shoot at a moose from the window of an airplane or other flying vehicle.

In Athens, Greece, a driver’s license can be taken away by law if the driver is deemed either “unbathed” or “poorly dressed.”

In Cleveland, Ohio, it is illegal to catch mice without a hunting license.

In Hartford, Connecticut, it is illegal for a husband to kiss his wife on Sundays.

In Helsinki, Finland, instead of giving parking tickets, the police usually deflate tires.

In Italy, it is illegal to make coffins out of anything except nutshells or wood.

In Jasmine, Saskatchewan, it is illegal for a cow to moo within three hundred kilometers of a private home.

In Kentucky, it is illegal to carry ice cream in your back pocket.

In Sweden, although prostitution is legal, it is illegal for anyone to use the services of a prostitute.

In Texas, it is illegal to put graffiti on someone else’s cow.

In the United Kingdom, there is no Act of Parliament making it illegal to commit murder. Murder is only illegal due to legal precedent.

It is against the law to stare at the mayor of Paris.

In Singapore, it is against the law to urinate in an elevator.

In Sweden, it is illegal to train a seal to balance a ball on its nose.

In California, it is illegal to eat oranges while bathing.

In Bladworth, Saskatchewan, it is illegal to frown at cows.

In Malaysia, it is illegal for restaurants to substitute toilet paper as table napkins. Repeat offenders go to jail.

Mailing an entire building has been illegal in the United States since 1916, when a man mailed a forty-thousand-ton brick house across Utah to avoid high freight rates.

A monkey was once tried and convicted for smoking a cigarette in South Bend, Indiana.

According to the United States Refuse Act of 1899, every industrial discharge into bodies of water since 1899 has been a crime.

Every citizen of Kentucky is required by law to take a bath at least once a year.

If you live in Michigan, it is illegal to put a skunk in your boss’s desk.

In Hartford, Connecticut, you may not, under any circumstances, cross the street walking on your hands.

In Idaho, a citizen is forbidden by law to give another citizen a box of candy that weighs more than fifty pounds.

In Indiana, it is illegal to ride public transportation for at least thirty minutes after eating garlic.

In Minnesota, it is illegal for women to be dressed up as Santa Claus on city streets. In Morrisville, Pennsylvania, women need a legal permit before they can wear lipstick in public.

In some parts of Alabama, it is illegal to carry a comb in your pocket.

It is illegal for boys in ninth grade to grow a mustache in Binghamton, New York.

In Omaha, Nebraska, it’s against the law to burp or sneeze in a church.

Some of these really make you wonder why they needed to become laws...

Corrupting the public morals is defined as a nuisance, and is declared a misdemeanor offense. Why are the politicians not convicted?

Women may be fined for falling asleep under a hair dryer, as can the salon owner.

A special law prohibits unmarried women from parachuting on Sunday or she shall risk arrest, fine, and/or jailing.

If an elephant is left tied to a parking meter, the parking fee has to be paid just as it would for a vehicle.

It is illegal to sing in a public place while attired in a swimsuit.

Men may not be seen publicly in any kind of strapless gown.

It is illegal to skateboard without a license.

You may not fart in a public place after 6 PM.

It is considered an offense to shower naked.

You are not allowed to break more than three dishes per day, or chip the edges of more than four cups and/or saucers.

Penalty for horse theft is death by hanging.

Unmarried couples may not commit “lewd acts” and live together in the same residence.

When having sex, only the missionary position is legal.

You may not kiss your wife’s breasts.

Having sexual relations with a porcupine is illegal. Who were they trying to protect?

"At a wake, mourners may eat no more than three sandwiches." (especially if they are deviled ham).

In Pennsylvania, all fire hydrants are to be inspected one hour prior to all house fires.

Here are some in Montana:

Helena: A woman cannot dance on a saloon table unless her clothing weights more than three pounds, two ounces.

It is illegal for a wife to open her husband’s mail.

It is illigal to spit tobacco on the street.

.In Massachusetts taxi drivers are prohibited from making love in the front seat of their taxi during their shifts

An old ordinance in Massachusetts declares goatees illegal unless you first pay a special license fee for the privilege of wearing one in public.

I believe it is still legal for an Englishman to shoot a Welshman with a bow and arrow if he enters English territory.

Also it is still illegal for a Catholic to be King or Queen.

Earlier reference to England, by nametaken, leads me to remind people that England does not have a written constitution. Everything is allowed unless prohibited by law.

I almost forgot this one.

A licenced taxi in London has to have enough headroom for the passenger to wear a Top-hat.

The purpose of this law was to encourage people to go to church on Sunday. So much for separation of church and state.....

Massachusetts liquor stores can only open on Sundays if they are in Berkshire, Essex, Franklin, Middlesex or Worcester counties and are within 10 miles of the Vermont or New Hampshire borders.

Here are some that I have heard about in Texas:

• When two trains meet each other at a railroad crossing, each shall come to a full stop, and neither shall proceed until the other has gone.

• It is illegal to take more than three sips of beer at a time while standing.

• Criminals are required to give their victims 24 hours notice, either orally or in writing, and to explain the nature of the crime to be committed.

In Galveston (where I spent a good deal of my youth):

• One needs permission from the director of parks and recreation before getting drunk in any city park.

• No person shall throw trash from an airplane.

I hope our good friend Goyo pays attention to this law that was listed by Nametaken:

Every citizen of Kentucky is required by law to take a bath at least once a year.

How are you doing with this one Greg?

In Rhode Island, you cannot sell a toothbrush and toothpaste to the same person on a Sunday.

In Atlanta, it's illegal to tie a giraffe to a telephone pole or street lamp.

This law is based on an act from 1760. Good thing for the airlines that they bag their pretzels somewhere else or it would be tough to fly in and out of Philadelphia.

Ok, really now. Some of these "laws" are clearly silly and preposterous, not just old fashioned. Can anyone come up with the story of how at least some of the sillier ones came to pass? Was it a matter of some wise guy trying to see what he could get away with on a sleepy summer session? Was it a matter that all the other legislators were drunk? Was it a bunch of bored lawmakers having a laugh at the citizens' expense??

updated JUN 1, 2010
posted by Gekkosan
I agree, I think at least half of these are made up. Actually, I think in Colorado it's illegal to make up phony laws... - amykay, JUN 1, 2010
Next
🚀 Remove ads
SpanishDict is the world's most popular Spanish-English dictionary, translation, and learning website.
© Curiosity Media Inc.
FEATURES
TranslationConjugationVocabularyLearn SpanishGrammarWord of the Day
ABOUT
About UsPrivacyTermsSite mapHelpContact Us
SOCIAL NETWORKS
Facebook
Twitter
Instagram
APPS
iOS
Android