I would like to know your answers. Thank you.

What I look like relates to my features, my physical appearance.

You are right Nila. This sounds very true. I just want to add that when someone asks what are you like, if the person is in front of you there won’t be any reason to start describing one's physical appearance unless the person is blind, is asking about a specific part of the body covered by clothing or the conversation is by telephone or internet. If the question is face to face it would undoubtedly refer to one's personality.

One's physical and intellectual abilities should also be taken into consideration but that kind of intertwines with personality also. I find your statements very interesting. To tell you the truth when I read the question it sounded like a booby trap. I knew there was some other hidden reason for asking a simple question like this. Maybe you could‘ve gotten more input if you would had stated your entire query from the beginning.

Yes, Nila, I think so. " What's Mrs. Harrison like? " could also have been answered, "She's a mean old biddy who throws things at kids who walk on her lawn" jejeje Either way works.

Although, most often I think Robertico is right, and when someone says "What are you like?" they are asking about personality.

In the above example about Mrs. Harrison they are making some very general comments which do relate to appearance. They imply very subtle negative or trivializing judgement however to "sum up a person" and their nature by saying they are simply "old and fat".

And also, though it would not be strange or wrong to answer "what is someone like" by talking about what they look like, the questioner could well respond by saying: "Yes, but what are they like" To mention just appearance might even be a way of being evasive. For instance, if I think someone stupid and rude and you ask me what he is like, I might stall by saying "...well, he's tall and has quite regular features" and you might look at me puzzled and say "that's not what I meant"

So, The question "What are you like" asks for a global assessment and description, of which appearance could be a part, especially if it is striking in some way. But few of us think of only our outward appearance when we think of what is important to know about us.

Robertico is right, as ususal.

What’s Mrs. Harrison like? Well, she is not a young woman and she is not thin. She is quite old, and rather fat.

In English they say that an ugly person has a face "like the back of a bus". I never knew why. Some buses at the back look OK to me..... 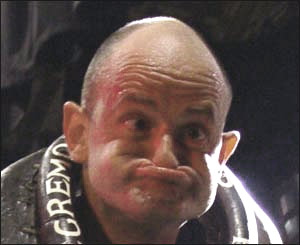 If you are referring to my passport photo, I do not look good at all.

Well, Kitty, it was clear that this had to have an explanation. After all, the information was in a grammar book.