If you think that Spanish or Castilian is the language of Spain, you're only partly right.

Spanish ,Castilian is the national language and the only language you can use if you want to be understood almost everywhere. But Spain also has three other officially recognized languages, and language use continues to be a hot political issue in parts of the country. In fact, about a fourth of the country's residents

use a tongue other than Spanish as their first language. Here is a brief look at them:

Euskara is easily the most unusual language of Spain — and an unusual language for Europe as well, since it doesn't fit in the Indo-European family of languages that includes Spanish as well as French, English and the other Romance and Germanic languages.

Euskara is the language spoken by the Basque people, an ethnic group in Spain and France that has its own identity as well as separatist sentiments on both sides of the Franco-Spanish border. (Euskara has no legal recognition in France, where far fewer people speak it.) About 600,000 speak Euskara, sometimes known as Basque, as a first language.

What makes Euskara linguistically interesting is that it has not been shown conclusively to be related to any other language. Some of its characteristics include three classes of quantity (single, plural and indefinite), numerous declinations, positional nouns, regular spelling, a relative lack of irregular verbsno gender,* and pluri-personal verbs.

The fact that Euskara is an ergative language (a >linguistic term involving cases of nouns and their relations to verbs) has caused some linguists to think that Euskara my have come from the Caucasus region, although the relationship with languages of that area hasn't been demonstrated. In any case, it is likely that Euskara, or least the language it developed from, has been in the area for thousands of years, and at one time it was spoken in a much larger region. The most common English word that comes from Euskara is "silhouette," the French spelling of a Basque surname. The rare English word "bilbo," a type of sword, is the Euskara word for Bilbao, a city on the western edge of Basque Country. And "chaparral" came to English by way of Spanish, which modified the Euskara word txapar, a thicket. The most common Spanish word that came from Euskara is izquierda, "left."

Euskara uses the Roman alphabet, including most letters that other European languages use, and the ñ. Most of the letters are pronounced roughly like they would be in Spanish.

Catalan is spoken not only in Spain, but also in parts of Andorra (where it is the national language), France and Sardinia in Italy.

In written form, Catalan looks something like a cross between Spanish and French, although it is a major language in its own right and, some say, may be more similar to Italian than it is to Spanish. Its alphabet is similar to that of English, although it also includes a Ç. Vowels can take both grave and acute accents (as in à and á, respectively). Conjugation is similar to Spanish.

About 4 million people use Catalan as a first language, with about that many also speaking it as a second language.

Galician has strong similarities to Portuguese, especially in vocabulary and syntax. It developed along with Portuguese until the 14th century, when a split developed, largely for political reasons. For the native Galician speaker, Portuguese is about 85 percent intelligible.

About 4 million people speak Galician, 3 million of them in Spain, the rest in Portugal with a few communities in Latin America.

Scattered throughout Spain are a variety of smaller ethnic groups with their own languages, most of them Latin derivatives. Among them are Aragonese, Asturian, Caló, Valencian (usually considered a dialect of Catalan), Extremaduran, Gascon and Occitan.

I've picked some vocab out of my Catalán book as examples. Where there are obvious similarities with French, I've included the French in brackets.

I have to say that from the point of view of someone with little experience of the language, vast swathes of it appear virtually identical to Spanish, & I reckon I could read a fair amount of Catalán simply based on my knowledge of Spanish (which is itself far from complete). That said, there are many common, everyday words that are not the same, being either closer to French or something uniquely Catalán (for example, 'gos' for 'dog' is a word that doesn't bear resemblance with any other language of which I can think). And some words are false friends, where knowledge of Spanish could send you of in entirely the wrong direction (for example, 'cama' for 'leg').

During my visits to Catalonia, I've heard local folk speak among themselves, and it seems they don't always use Catalán. For example, in Barcelona and Valenica, 'mesa' seems fairly standard for 'table' (as opposed to 'taula').

I suppose a cynic might question whether Catalán truly merits its status (it's meant to be the main medium of education in Spanish state schools in Catalonia, as I understand it), given it's often not spoken in pure form (or whether efforts to represent it thus actually belie a more political agenda). Catalonians might say 'parlar' for 'hablar', & use a variety of distinct words for everyday things, but does this make it a separate language as opposed to a dialect ? Scots use 'to ken' for 'to know' (which is closer to the German 'kennen' ('conocer')), but this doesn't necessarily makes Scots English a separate language from English (& neither Scots English nor (Braid) Scots has ever enjoyed official recognition such as Catalán does nowadays).

However, I guess the truth of it is that there's a kind of language/dialect continuum in Spain (as also exists in the UK, Netherlands/Germany, North Africa etc), so folk simply use the same words as other folk around them, picking & mixing from different sources (like my wife's colleague, who can't say whether she speaks Castellano or Catalán or whatever). I would certainly support regional diversity and oppose overly austere attempts at centralisation. That said, enthusiastic proponents of minority languages also need to exercise care in how they try to stamp their mark on their regions.

updated Aug 4, 2015
edited by Faldaesque
posted by Faldaesque
You are correct there mate although a couple of the words you list are pure Italian , I noticed in the area below Valencia it was quite different , use of 'x' for 'j' etc. - ray76, Mar 26, 2015
Aye, I guess so about Italian but don't really know any of that language. I've also spent some time in Provence, where they have a very distinct accent. However, Provençal (which seems even closer to Catalán than French is), hasn't enjoyed... - Faldaesque, Mar 26, 2015
...the same success in standing its ground against dominance by its bigger cousin language. - Faldaesque, Mar 26, 2015
I noticed the word for 'night' is "nit" Monty Python is now even funnier with his "Knights of nit" - ray76, Mar 26, 2015
Thank you for that list it is very interesting ,I love it. - ray76, Mar 26, 2015
7
votes

I've visited Spain & its islands maybe 10-12 times in my life, & 90% of these were where they speak Catalán or a dialect of Catalán, like Valenciano or Mallorquín.

On one of my first trips to Spain when I was a student in my early 20's, I went to Barcelona. I saw many public notices were in Spanish & Catalán, & I remember standing behind a Spanish father & his son in a queue. They were obviously also tourists because I overheard the little boy query the notice & his father explain it was the local language (he must've said 'es el idioma local' or something like that, because although this was before I had studied Spanish, I could still understand him).

I always found these public notices interesting, because before studying Spanish I could actually understand them more easily in Catalán than in Castellano because of the similarities between Catalán & French.

About 5 or 6 years ago a work colleague of my wife bravely moved to Catalonia to teach in an English-speaking school. We drove her to the airport & I remember speaking to her about her impending adventure whereupon she admitted she had no Spanish. Last summer we attended her wedding in Spain to a Spanish man (from Valencia). She's now obviously fluent in some other language, because I heard her speak it with natives (& she's wed to one of them). This time I asked her if she speaks Spanish or Catalán or whatever. She said she honestly doesn't know, because she just speaks what the folk around her speak as she's picked it up over the last few years.

I have a book on Catalán which I've flicked through. It seems reasonably accessible for someone with knowledge of Spanish and/or French, but I've decided to put it by for a while until I've improved my Spanish considerably, otherwise I fear I could become utterly lost between them.

I have done a lot of translating on Duolingo and I have worked with Spanish translators who know Catalan. It seems to be a mixture many Iberian languages. The Catalan goverment has a website that offers lessons. Here is a website for some basic phrases, etc.

For those that are still in need of this thread I am happy to repeat it.

Where Basque (Vasco) is spoken. 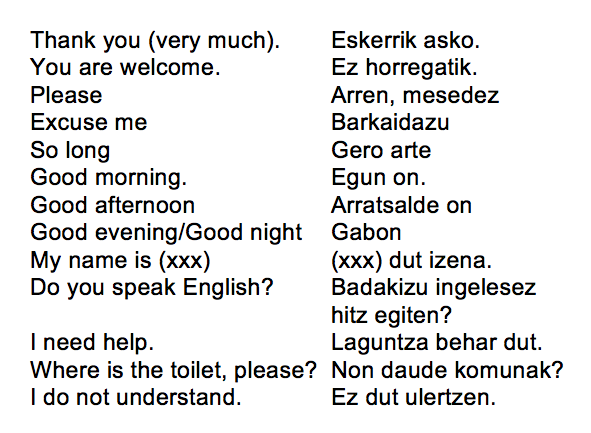 No one has mentioned the Andaluzan language. There are some who consider it nothing more than a "dialect," but others affirm that it is a language in itself, somewhat difficult to understand. Some characteristics of this "dialect" or "language" were transmitted to Latin America, especially in Puerto Rico and Cuba.

In spite of being born in Andalucia (Rota) I remember very little about Andaluzan.

If you want to see more about this topic, see the link below.